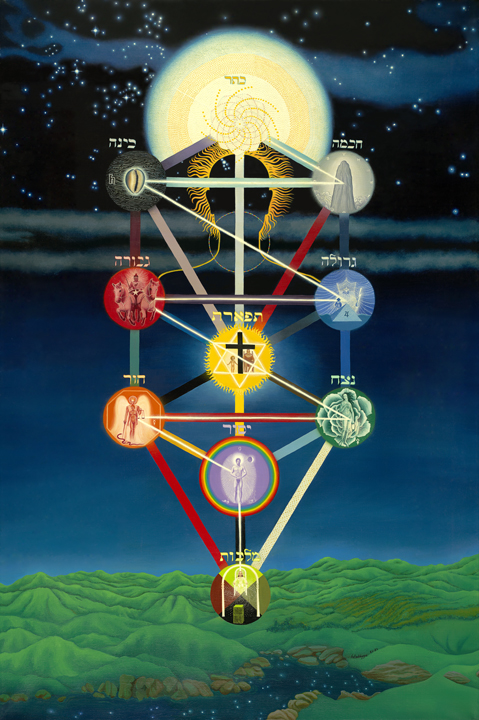 This painting of the Kabbalistic Tree of Life had a long public life as a best-selling poster. Beginning in 1984, it was in print for 15 years and sold more than 15,000 copies. Samuel Weiser, Inc., the publisher, also used it as a book cover for The Mystical Qabalah by Dion Fortune and as the cover of Weiser's 1984-85 catalogue.

I did this meditation painting in the early 1980s for students of the Judeo-Christian traditions. It took one and a half years to complete and was the only painting I worked on during that time. Each sephiroth (sphere) is a tiny, detailed miniature painting in its own right. This interpretation of the Kabbalah would appeal to both Christians and Jews, especially those whose beliefs are not strictly Orthodox. If you are interested in Christian mysticism or esoteric Christianity, gnosticism, theosophy, or a New Age version of Christianity, this painting may inspire you to look more closely at your Judeo-Christian roots. The painting is based on Dion Fortune's view of the sephiroths and combines Greek, Egyptian, and Vedic mythology, Tarot cards, and other Western symbolism. Dion Fortune, an early Theosophist, first published her book The Mystical Qabalah in 1935, at a time when information about Kabbalah was restricted to Jewish males. One element of her Tree of Life that illustrates its Christian viewpoint is the yellow center sephiroth, called Tiphareth, which has a Crucifix superimposed over a Star of David, as well as the young Christ child and a King.. This sephiroth corresponds to the heart center or heart chakra in yogic traditions. In the painting, the sephiroths are laid over a fiery silhouette of Adam Kadmon, the universal man. Over the years, I have received many letters from an eclectic assortment of people who bought the poster: students of Kabbalah, New Age teachers of various types, and even a letter from a Christian priest studying at seminary.

Just as Far Eastern sacred art attempts to guide spiritual seekers to enlightened states of mind by using imagery from Buddhist and Hindu cosmology, each sephiroth on the Kabbalistic Tree of Life uses archetypal symbols that are familiar to Westerners. The Kabbalah is an ancient tradition of esoteric teachings that sprang up within Judaism. In the late 19th century, the Theosophists incorporated its teachings into a mystical form of Christianity.

The poster version of the painting is reduced in size to 26 by 18 inches, so the nude figures are not that obvious.